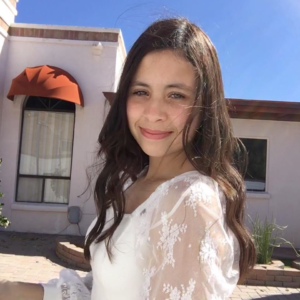 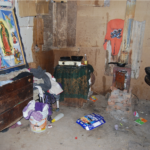 In the winter of 2012, 8-year-old Erika was discovered in the barrios of Agua Prieta by a group of volunteers during a Rancho Feliz service trip. She and her older sister, 11-year-old Karina, showed up for an annual clothing distribution and immediately caught the eye of some Americans. Freezing, starving and without a parent in sight, they appeared playful and curious about the volunteer event. When asked about their parents, they wouldn’t respond.

Rancho Feliz volunteers and staff felt they needed to know more about these young girls. They were devastated to learn they were living in a cardboard shack with no running water or electricity. Conditions were dire and they were completely alone. Rancho Feliz and Vecinos Dignos immediately intervened, seeking support from Mexico’s social service agency (DIF).

Over the next few months, DIF and leaders of Vecinos Dignos worked together to remove these bright young girls from such neglect and abuse. Their father was incarcerated; their mother was a drug addict with an abusive boyfriend. A psychologist recommended the girls be turned over to the custody of the state of Sonora. Erika and Karina were moved to a nearby orphanage—one that Vecinos oversaw at the time. The girls were safe now. 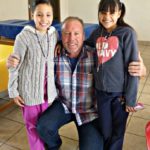 While adjusting to life at the orphanage, Erika was discovered to be especially bright. Rancho Feliz brought her to Colegio Anais, a nearby private, bilingual school, where she tested academically high. Although she had some catching up to do, she was granted admission and sponsored by a Guardian Warrior donor right away. Erika began to blossom. She was no longer a street child but a thriving student. Her sister Karina, however, was struggling and began to display signs of mental regression. After much consideration, Karina was sent to Hermosillo, where specialized care was available.

In early 2020, Erika was adopted by a loving family in Tucson, Arizona, where she continues to thrive.

Her story is one of resiliency and luck. Had the volunteers not noticed these little girls with so much potential, their lives would surely have been full of tremendous struggle and pain.

extreme service - extreme karma - are you a guardian warrior?
Navigate
Making a Difference
Rancho Feliz Charitable Foundation is a volunteer based, multi-national, secular, non-profit 501(c)3 organization. We reside in Scottsdale, Arizona and serve in the community of Agua Prieta, Sonora, Mexico. We are volunteers committed to redefining charity.
Fund a Scholarship
Contact Us
Kim Kroger Woodhouse
Director
Email: [email protected]